We brought #136 home on a hydraulic trailer. This time we took the wet approach. Because she was in the water and sound, we could travel by water from Daytona to Stuart.

Daughter Liv and I drove upto Halifax River YC. After a bit of provisioning, loading a rediculouse amount of gear, and an oil change we set off. 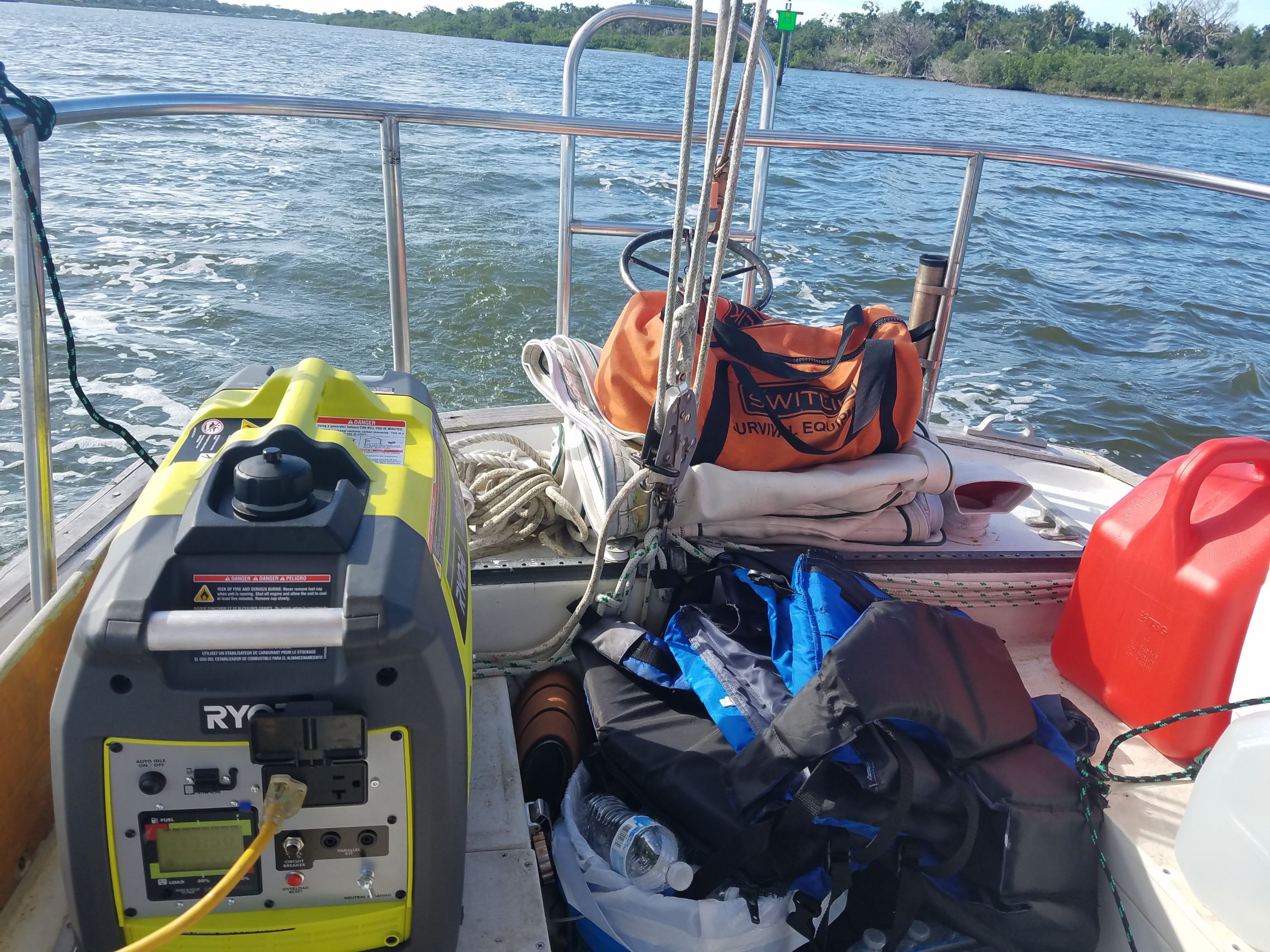 We got underway about 1pm. Relatively uneventful. Liv did most of the steering while I got busy going through the boat.

Night fall found us at Allenhurst basin in the Cape Canaveral preserve. Two of the items we had brought went into serious use: the generator and the air conditioner. Outside air temp was still about 87 degrees at midnight and lots of mosquitoes. We were really happy to be in side and 75. It was cramped and messy with junk stacked every where. We took advantage of the dumpster to little effect. 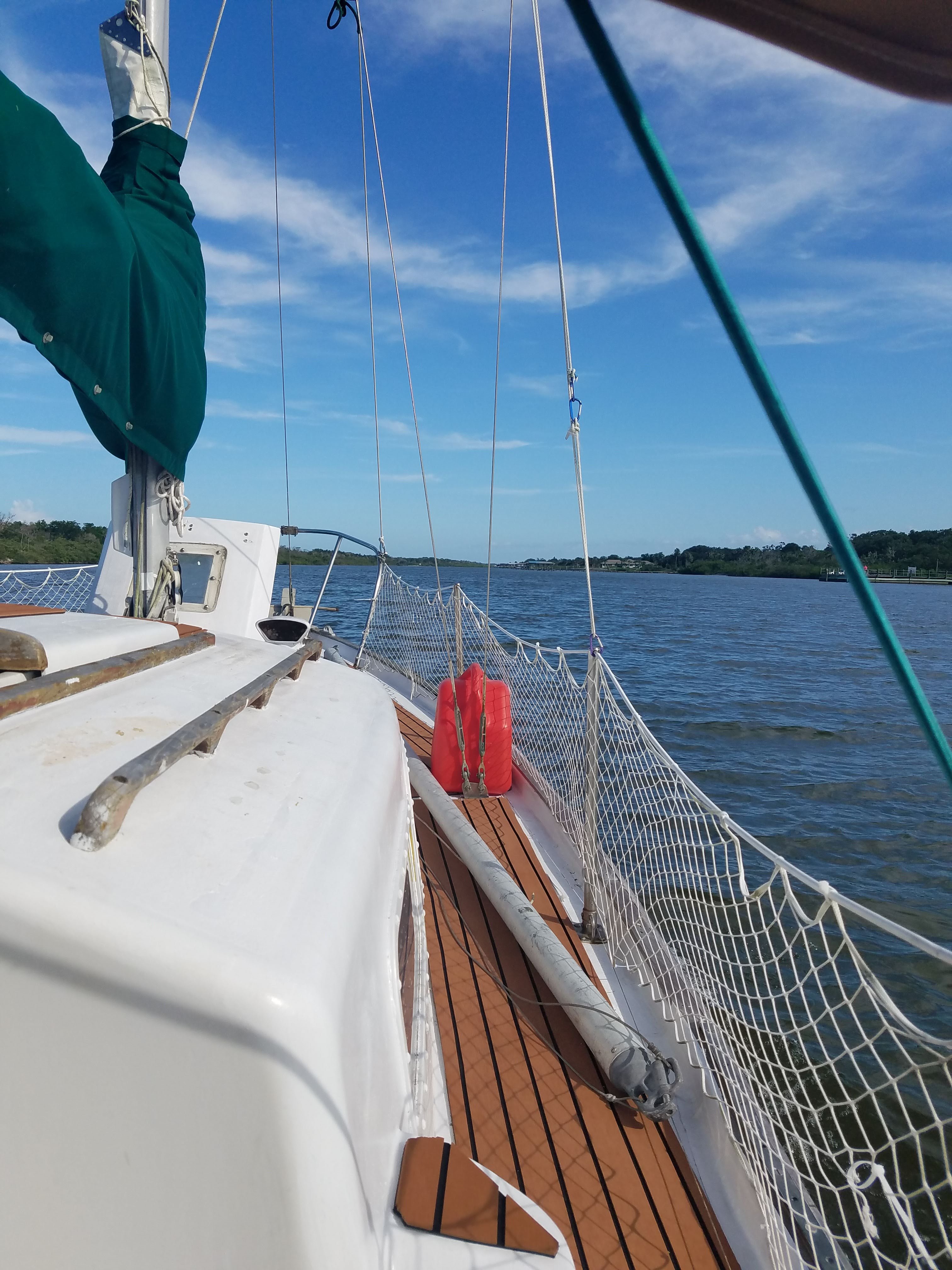 We got an early start and motor sailed down the Indian River, making Vero by night fall. Liv had to jump ship, leaving me alone with the mess. In the morning I took several more loads to the dumpster and then headed further south.

Home at 3 pm and anchored in Manatee Pocket by dinner time.

After some soul searching we have have changed coarse. We decided to look around for a boat that was a little more put together and closer to being usable.

#593 is a 1976 Tartan 27 mk2. This model is nearly identical to the classic with some subtle changes to the cocpit and cabin. Our new boat has a yanmar GM20. I greatly prefer a diesel . And the biggest thing: she is in the water and more or less usable as is.

The good news is we had a busy year.

The bad news is that when you work 6 days a week on customer boats you don’t work on your own.

So The plan is whenever posible Friday’s are reserved for Damsel.

The last few Fridays have been productive in further cleaning. Putting parts in storage and just getting things off the boat and out of the way. I found I was spending half my time moving things around so Icould clean under them.

And yesterday I got the air conditioning working. I have a free standing unit. Low voltage was an issue. I ran a 220 volt 6 gauge cord out to her and now the 120 is solid. That will make a huge difference this Summer.

Well this post shows why I am planning a 2 year refit.  Finally spent my first full day just cleaning. Time is in short supply.

A recent quick trip to the Bahamas  (by plane) has reminded me why I want this girl in the water.

Cadillac and Zebe were ready with the Cono-lift and the day was almost done. 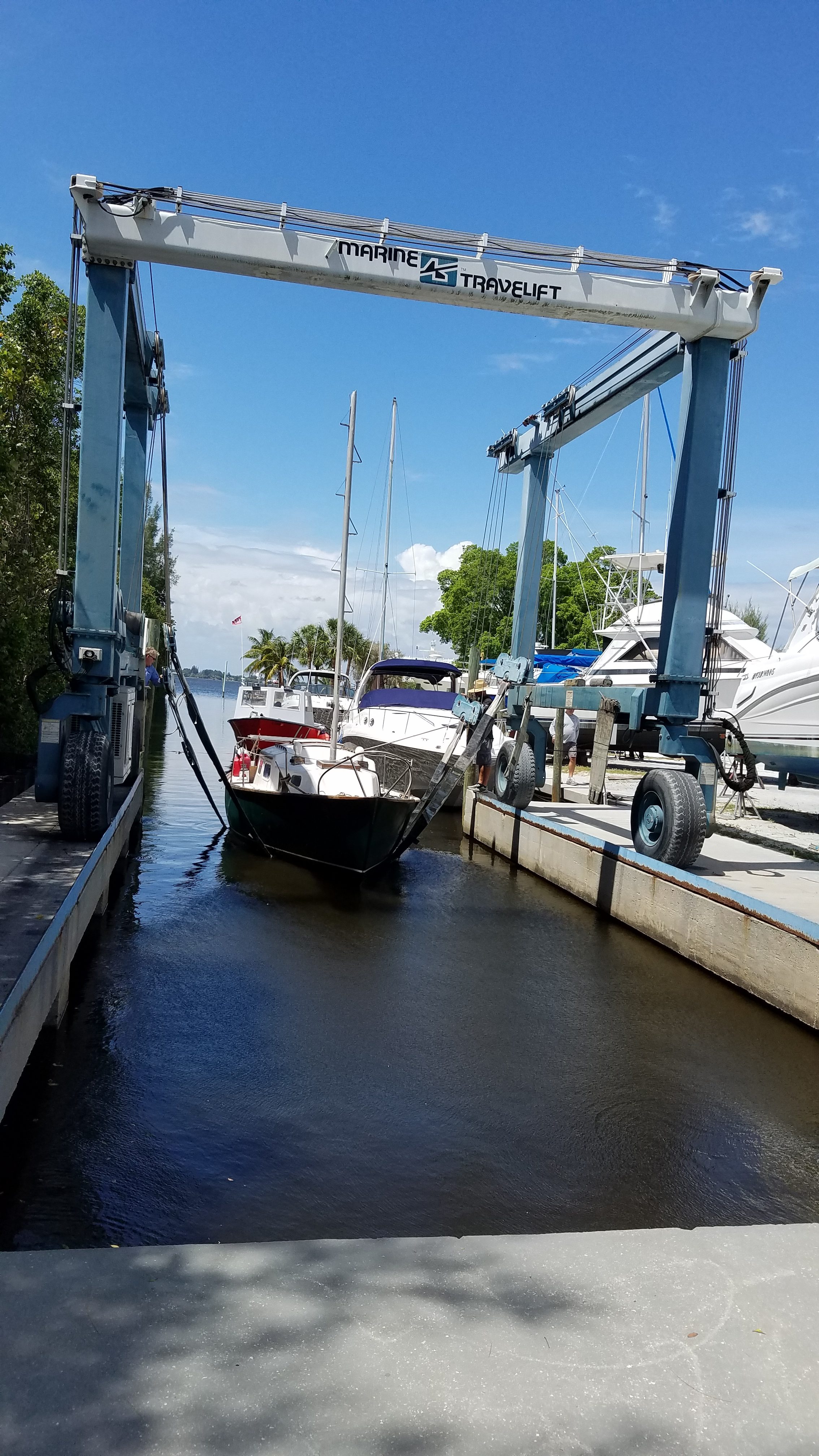 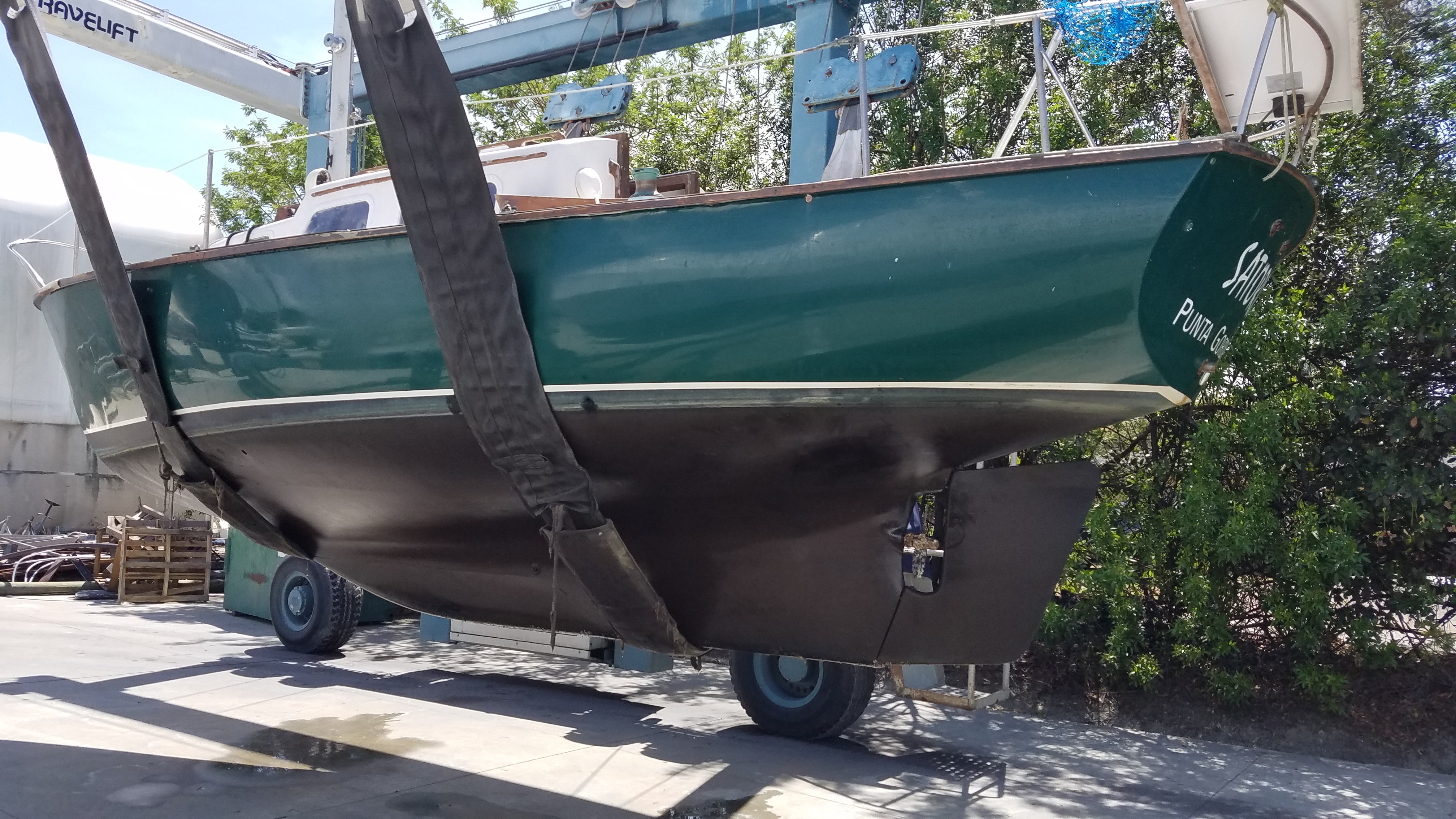 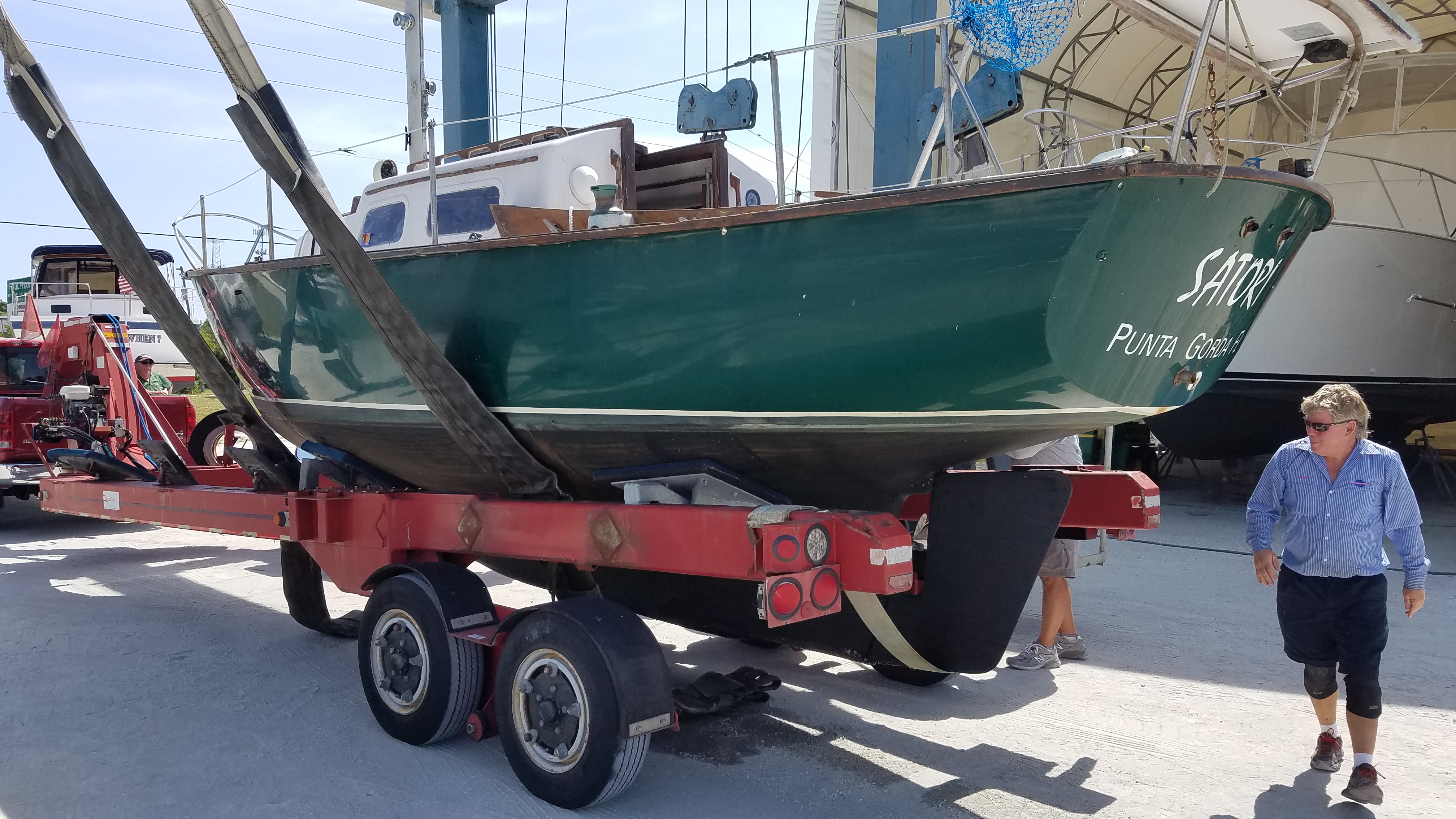 Just a three hour drive and we are done.  And pizza, kinda missed lunch but had a great pizza on the way out of town.

We slipped down tbe creek with little effort. 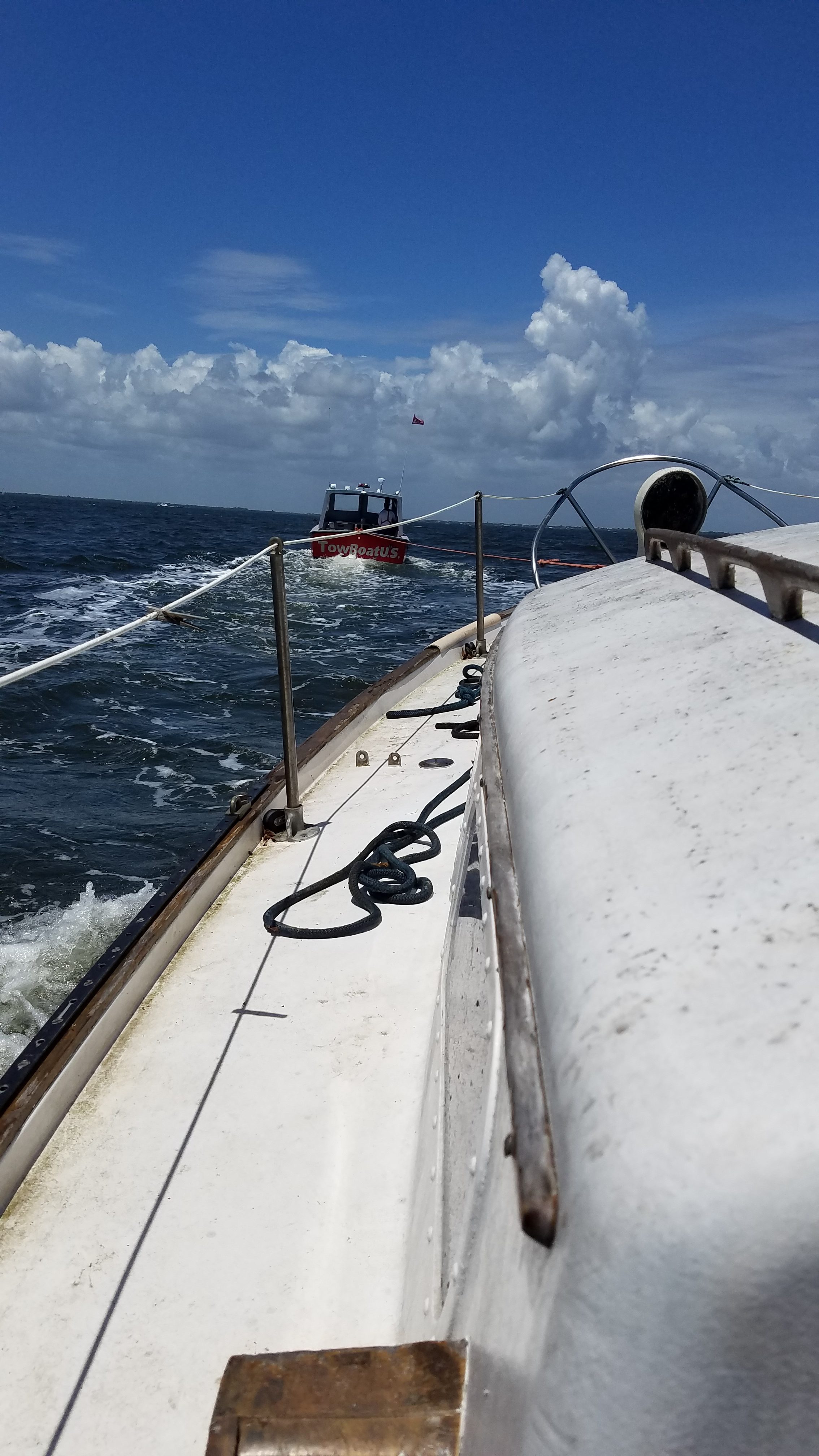 And then…silence. We quickly determined that the ignition system had lost its spark. Coil or condenser, didn’t really matter.  I was planning on putting electronic ignition on the A4 any way, but with a stump rig all we could do was anchor and wait for Boat US towing. The tow captain was skilled and efficient.  We were about an hour and a half late for our haul out.  Craig and Shelley Massey at Punta Gorda Marina were not put out in the slightest. I love working with professionals. 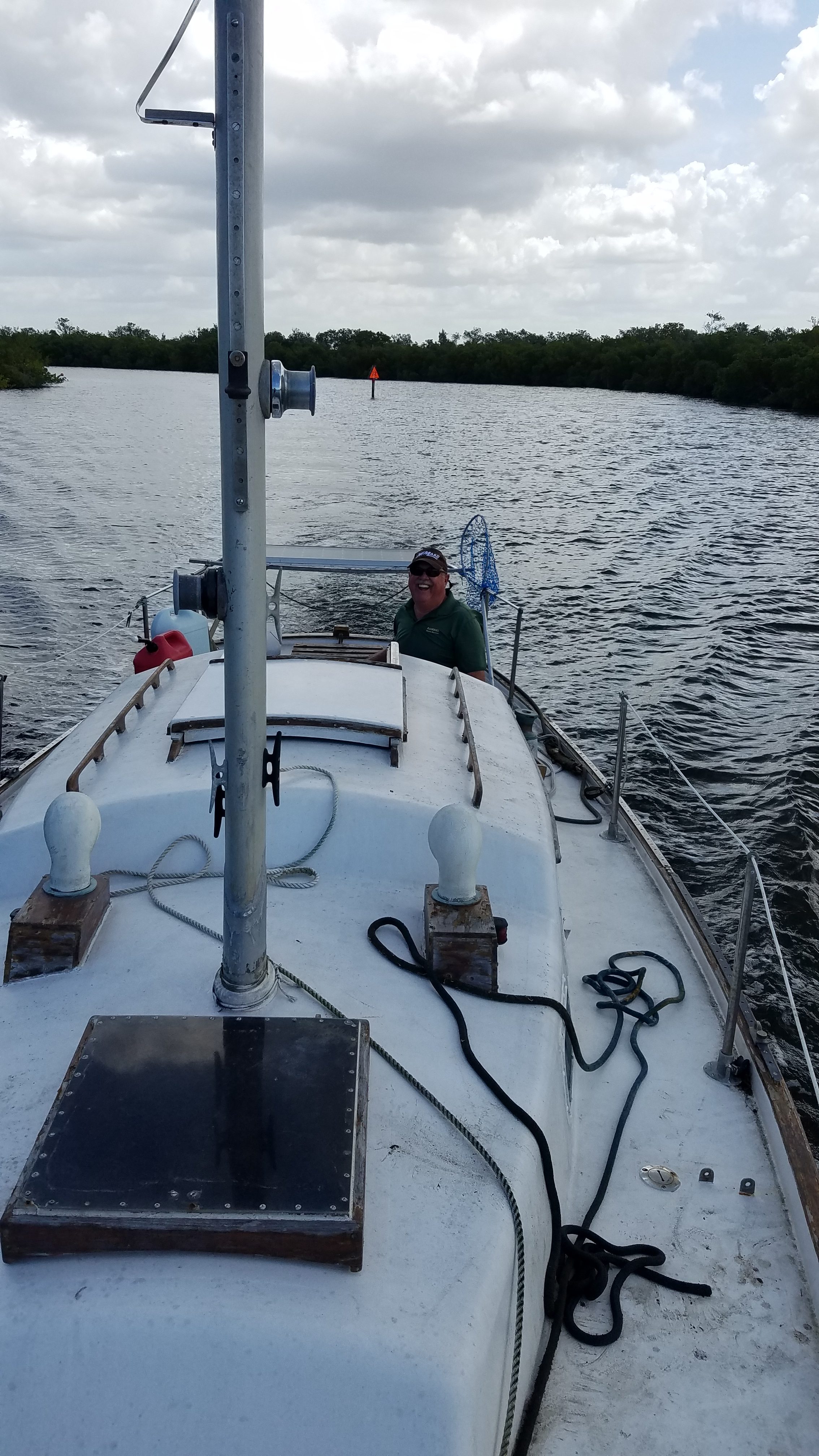 Our good friend Bob on the tiller.

This is probably a good time to mention that SATORI (soon to be known as DAMSEL V) was dismasted. She lost the starboard upper chain plate. We have collected the mast from a sister ship. 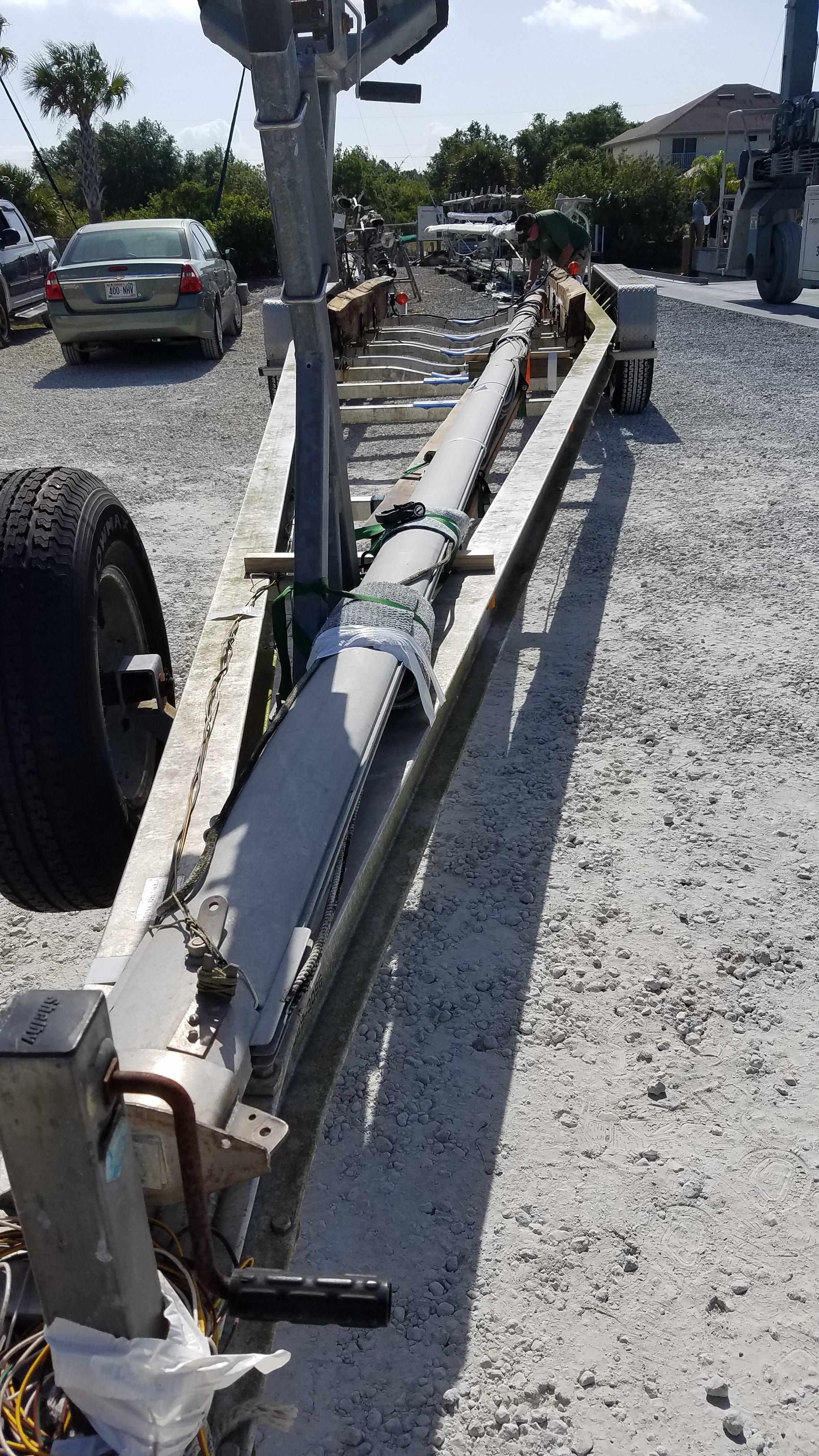 We don’t know the hull number, but she was broken up a Charlotte Harbor Boat Storage in 2015, 2016.  Fortunately Dan, the owner of SATORI, learned of its exsistance before it was scrapped. We collected the rig this morning and are heading to get #136 on a trailer to take her home to Stuart Fl. 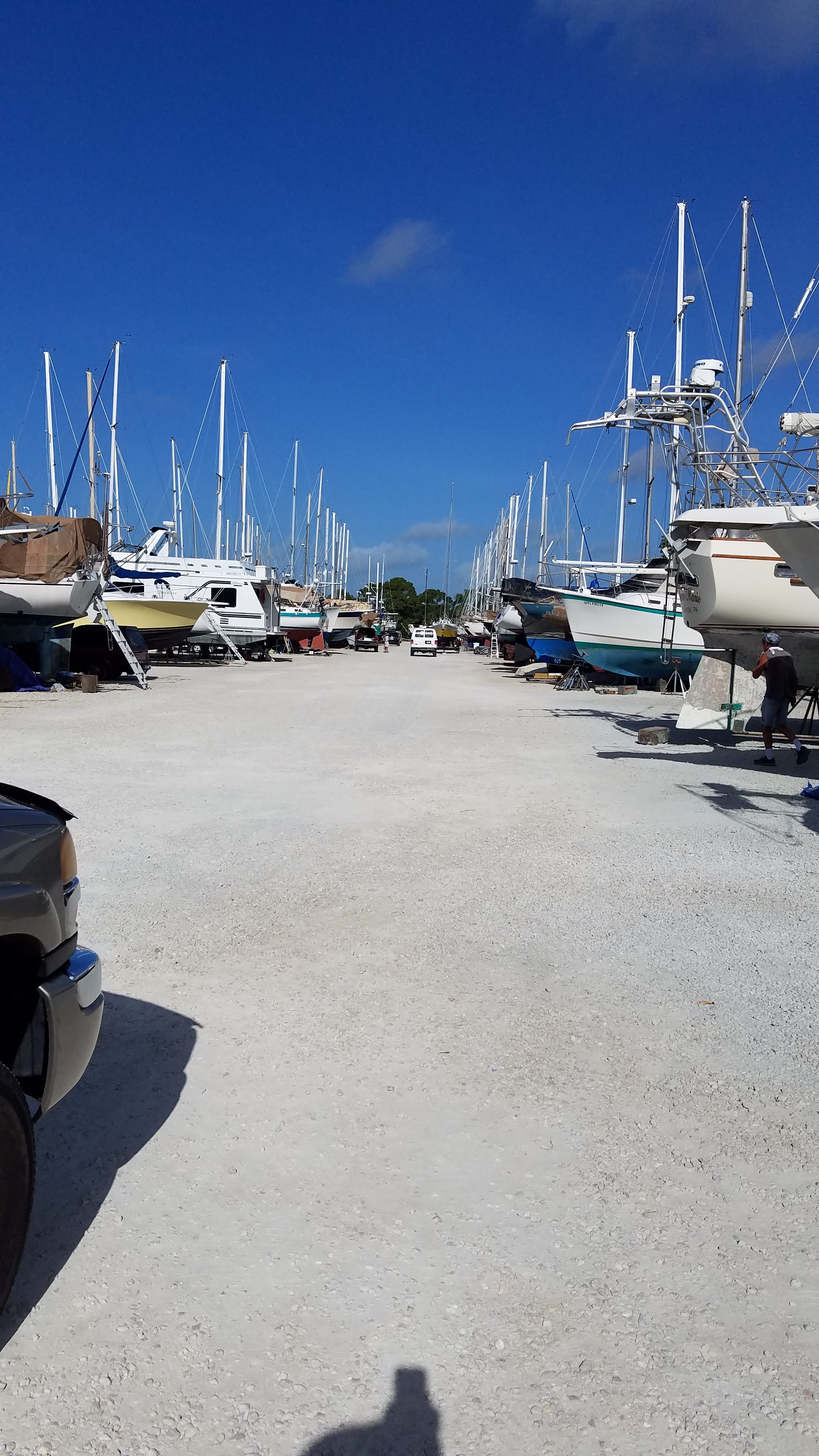 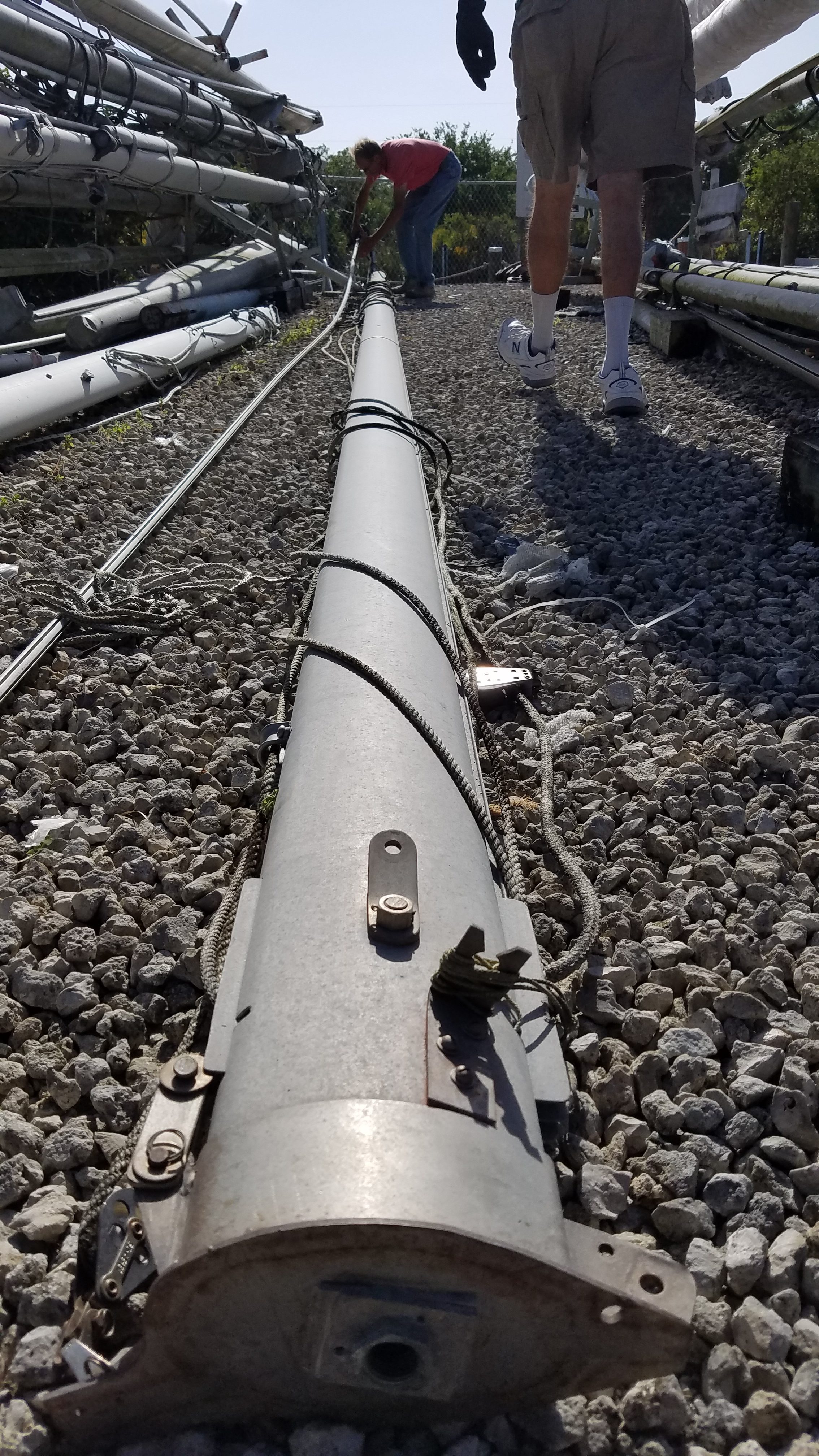 We Have gone and done it, bought a project boat.  Preparations are underway to bring her home.  We have to collect the rig and haul her to a hydraulic trailer.  Many friends are digging in to help.

This Blog will chronicle our restoration of T27 #136 built in 1965. The clasic S&S design just calls out for some Bahamas and Keys sailing. Now we just have to get her there.